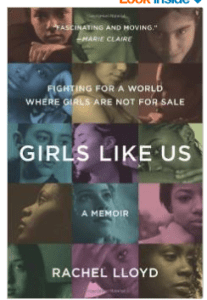 During her teens, Rachel Lloyd ended up a victim of commercial sexual exploitation. With time, through incredible resilience, and with the help of a local church community, she finally broke free of her pimp and her past and devoted herself to helping other young girls escape “the life.” She is a survivor.

In Girls Like Us, Lloyd reveals the dark world of commercial sex trafficking in cinematic detail and tells the story of her groundbreaking nonprofit organization: GEMS, Girls Educational and Mentoring Services. With great humanity, she shares the stories of the girls whose lives GEMS has helped—small victories that have healed her wounds and made her whole. Revelatory, authentic, and brave, Girls Like Us is an unforgettable memoir. 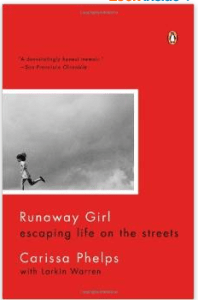 Carissa Phelps was a runner. By the time she was twelve, she had run away from home, dropped out of school, and fled blindly into the arms of a brutal pimp. Even when she escaped him, she could not outrun the crushing inner pain of abuse, neglect, and abandonment. With little to hope for, she expected to end up in prison, or worse. But then her life was transformed through the unexpected kindness of a teacher and a counselor. Through small miracles, Carissa accomplished the unimaginable, graduating from UCLA with both a law degree and an MBA. She left the streets behind, yet found herself back, this time working to help homeless and at-risk youth discover their own paths to a better life. Like the multimillion-copy bestseller The Glass Castle, this memoir moves us through the power of its unflinching candor and generosity.

The Slave Across the Street 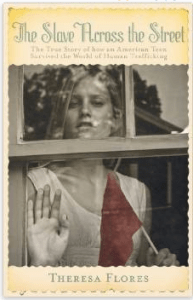 In this powerful true story, Theresa Flores shares how her life as an All-American, blue-eyed, blond-haired 15-year-old teenager who could have been your neighbor was enslaved into the dangerous world of sex trafficking while living in an upper-middle class suburb of Detroit. Her story peels the cover off of this horrific criminal activity and gives dedicated activists as well as casual bystanders a glimpse into the underbelly of trafficking. And it all happened while living at home without her parents ever knowing about it. Involuntarily involved in a large underground criminal ring, Ms. Flores endured more as a child than most adults will ever face their entire lives.

In this book, Ms. Flores discusses how she healed the wounds of sexual servitude and offers advice to parents and professionals on preventing this from occurring again, educating and presenting significant facts on human trafficking in modern day American.

Walking Prey: How America’s Youth are Vulnerable to Sex Slavery 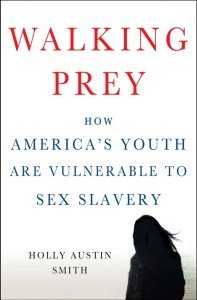 Today, two cultural forces are converging to make America’s youth easy targets for sex traffickers. Younger and younger girls are engaging in adult sexual attitudes and practices, and the pressure to conform means thousands have little self-worth and are vulnerable to exploitation. At the same time, thanks to social media, texting, and chatting services, predators are able to ferret out their victims more easily than ever before. In Walking Prey, advocate and former victim Holly Austin Smith shows how middle class suburban communities are fast becoming the new epicenter of sex trafficking in America. Smith speaks from experience: Without consistent positive guidance or engagement, Holly was ripe for exploitation at age fourteen. A chance encounter with an older man led her to run away from home, and she soon found herself on the streets of Atlantic City. Her experience led her, two decades later, to become one of the foremost advocates for trafficking victims. Smith argues that these young women should be treated as victims by law enforcement, but that too often the criminal justice system lacks the resources and training to prevent the vicious cycle of prostitution. This is a clarion call to take a sharp look at one of the most striking human rights abuses, and one that is going on in our own backyard.

Paid For: My Journey Through Drugs and Prostitution:
One Brave Woman’s Account of the Violence that is Prostitution. 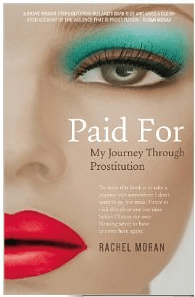 by Rachel Moran.  Great account by a survivor which includes political analysis.

The author came from a difficult family background in North Dublin city and by the age of 15 she was living and working on the streets. For the next seven years she was a prostitute, both on the streets of Dublin, in brothels around the city and occasionally in other Irish locations. At the age of 22, a series of lucky breaks liberated her from life as a prostitute and started her on the path to further education and ultimately a degree in Media Studies and Sociology from Dublin City University. Paid For is her own story in her own words and in her own name. It pulls no punches. In addition to the narrative elements, it contains searing social analysis which explodes many of the myths about prostitution. The author believes there are no happy hookers. To experience prostitution is to endure a cycle of misery, danger, violence and numbness. This is a book of startling originality, courage and honesty. It tells the story of a hidden world, one which is often trivialised and glamorised, with clarity and an eloquence that is quite unique. Paid For tears away the veil that shrouds prostitution and, from her own experience, tells us the truth.