Save US Children by Robert Benz of the Frederick Douglas Family initiative appeared in Huffington Post on 5/19/2014.  It makes the case for how our language about the victims of sex trafficking influences the response.

Most of us have heard about the Nigerian schoolgirls that were kidnapped by the extremist group, Boko Haram. #BringBackOurGirls and the media surrounding that Twitter hashtag incited outrage and set-off an international call for action to rescue the schoolgirls. It’s encouraging that something is being done to help these children in Nigeria as a result of this attention. The question now is: How can we use aspects from this model of “flash awareness” and the provocation of action that followed to address underreported crimes perpetrated against children right here in the United States? 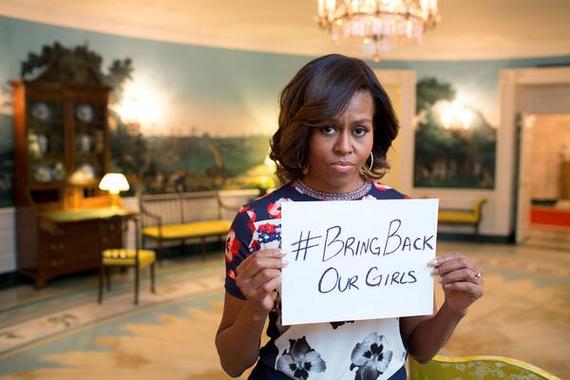 So, what distinguishes the Nigerian schoolgirls and U.S. children at risk of being trafficked? Why has one group received so much attention and the other very little? Well, semantics may play a role in how we react to different groups of children that become victims of violence. The term “schoolgirl” is filled with positive connotations that we generally associate with innocence. Schoolgirls, especially those that must overcome extraordinary challenges to get an education, also embody our own ideals of courage and therefore align favorably with those things we’re willing to passionately defend. The children at risk of being trafficked in the U.S., however, are more likely to be associated with negative and prejudiced terms that are easy to reject such as: homeless, runaway, throwaway, underage prostitute and delinquent. Can anyone imagine a similar level of international outrage if Boko Haram had kidnapped 230 delinquents? Conversely, how quiet would the U.S. public remain had there been 8,220 schoolchildren sold commercially for sex during the 30 days of April?

The other difference between these two groups of children is the motivation of those who perpetrate crimes against them. Boko Haram was not motivated by what many would call a rational cause — money or profit. Selling the schoolgirls appeared to be an afterthought. They were motivated by extremist religious convictions. There’s no good way to stop this kind of disturbing, though relatively uncommon, behavior.

Children being sold or at risk of being sold commercially for sex, on the other hand, are vulnerable for a very predictable and disturbingly common reason — money or profit. Children are commodities in the commercial sex industry and their exploitation is part of a well-established system. This system is very different from anomalous kidnappings that seize upon our worst fears about evil in the world. The commercial sex industry is a well-managed subculture of commerce that feeds upon the young right here in the United States. And, what makes this much more problematic than a group like Boko Haram is that it’s a business driven, not by the traffickers, but by those who create demand for the human commodity: the college student, the software engineer, the CEO, the husband, the brother and the father. We can, however, work to stop this.

Now for the similarities between the Nigerian schoolgirls and the children being sold or at risk of being sold commercially for sex in the U.S.: They’re children — minors. Whatever labels we choose to place on them and wherever they fall on our perceived spectrum of innocence… they’re still children.

In the 19th century, American slave owners employed methods of dehumanization to justify their industry and to counter the outcry from Abolitionists trying to end the institution of slavery. Enslaved humans were often referred to as animals, rodents or other terms that attempted to make them unworthy of the general public’s concern. Slave owners even went so far as to hire “scientists” to produce reports that “proved” enslaved Americans of African descent were biologically inferior to the white race. Dehumanization is an old and well-tested method applied by those wanting to exploit, enslave or exterminate specific groups of people.

The U.S. Department of State now says that solving the Nigerian schoolgirls crisis is the highest priority. This is excellent news. Why not use this incident to start thinking about solutions for the children at risk and those being trafficked here in the US?

First of all, we must eliminate our own cultural complicity. In spite of the calamities that befall children — exposing them and make them vulnerable to being sold commercially for sex — we cannot be complicit in dehumanizing them. That means being suspicious of and rejecting the negative characterization of children —surfacing in the media or in our own discussions — who find themselves in trouble. We can’t buy into dehumanization because it’s a form of writing off, forgetting and re-victimizing these children – exactly why we have all agitated so fiercely on behalf of the Nigerian schoolgirls.

Secondly, following the lead of courageous girls everywhere, who fight to receive an education, we must educate both students and teachers about the reality of sex trafficking in our communities. Traffickers rely upon ignorance to be successful. “Knowledge,” Frederick Douglass said, “makes a man unfit to be a slave” (and, of course, women and children as well).

Finally, we must understand that children being sold commercially for sex in the US is a real and ongoing problem. It’s not something that can be solved overnight. It will require a lot of people becoming angry, fed-up and willing to speaking out. As we’ve seen with the international mobilization around the Nigerian schoolgirls, perhaps it’s a model that can work. Let’s start here: #SaveUSChildren